As simple as it can get. 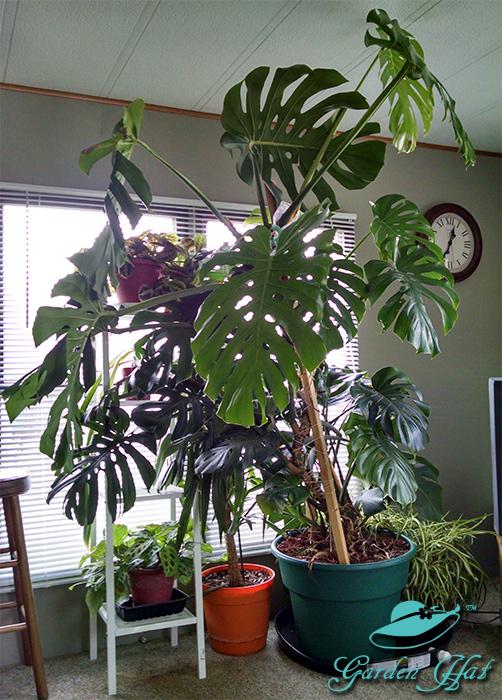 You have a monsterous Monstera Deliciosa, aka Swiss cheese plant or sometimes called split leaf philodendron. Whatever you call it, when it gets big and the leaves are touching your ceiling, you want to cut it back, you want to take some of the growth shoots and root them. What do you do? Air layering is the answer. The process is a bit more complicated than just taking cuttings, but has the advantage that the propagated piece continues to receive water and nutrients from the parent plant while the roots form.

With this type of plant, that climbs by adventitious roots from the stems (brown rope-like roots) – these will attach to almost anything, walls, cracks, tree trunks…your carpet if you don’t notice it soon enough – air layering is as easy as finding the spot on a stem with an aerial or adventitious shoot, wrap that location with moist sphagnum moss – a good handful – then wrap that with plastic wrap and tie it with twine. You’ve now made a little pouch filled with the moss around that root. Next, poke a few air holes in the plastic and make sure to moisten it lightly every week or so. In a few weeks to a month, there will be a mass of roots growing into the moss and you can cut the stem below the roots and take that new plant and pot it up. Now you have TWO!

On plants that do not produce aerial roots, such as ficus, you will have to make a cut in the stem where you want the roots to be. Take a sharp knife and make a v-notch in the stem. Don’t cut out too much, or too deep where you weaken the stem, but enough to pack in the sphagnum moss and again, wrap with plastic, tie up, poke holes and forget about it until you see roots. (Well, don’t forget about it…moisten every so often…then watch for roots!)

You CAN use rooting hormones to help speed the process a bit, I’ve used Olivia’s Rooting Gel on some with good results, and I’ve also used SuperThrive in the water I moisten the moss but on my son’s Monstera, I didn’t add anything and got a bunch of roots on a VERY LARGE growth shoot, and in only about three weeks. So, it’s up to you.

There are a great many plants that can be propagated using the air layering method, some take longer to produce roots than the Monstera, but it can produce a larger, more viable plant than the cutting method where there’s always the chance it won’t take and you’ve wasted time and precious plant material. Give it a try! 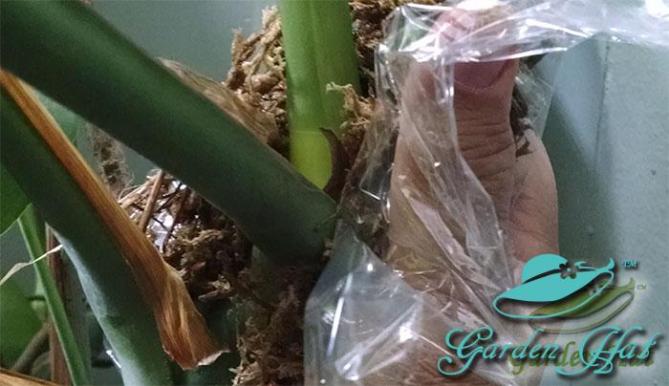