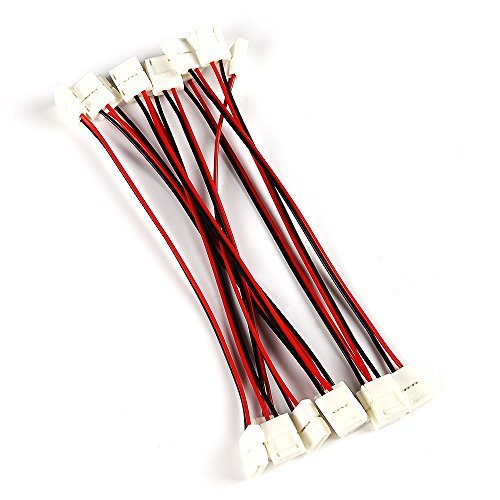 Whether you run one or more colors or if you have continuous runs of 4 or more led light strips on your African Violet shelves, you will need to use connectors.

LED Connectors are solder-less connector cables that have one 22awg red positive wire and one 22awg black negative wire with a two-pin connector at each end. As illustrated in the picture. The idea is that the LED light strip is inserted so that the copper contacts of that strip are slipped under the pins. The cover then snaps down to hold the contacts together. NORMALLY, it works just fine with the opposite ends connecting in the same way to the next strip. This makes the curve or bend so that the tapes can run flat and parallel to the other one. With these connectors, you can have a strips in different colors or light intensity running parallel.

HOWEVER, in many of these connectors, the pins are not exactly straight or they’re too narrow. This causes the copper contact points to barely fit under the pins. As you can see in the pic, they don’t exactly line up with the pins. Well, you say, they barely do…if there is some contact, it should suffice, yes?  NO.

I’ve found if the pin isn’t solidly over the copper contacts, any slight movement of the wire or setup as a whole might cause them to lose contact. They may lost contact just enough so that the light strip begins to flicker or just go out.  This is not fun to troubleshoot when you’ve mounted the lights underneath the shelf and already placed it 3 inches or so above the plants! When you stick the lights up under there, you don’t want to have to be pulling them off halfway to check the connections. These strips don’t have a finite amount of tackiness to be pulled off and stuck back while you troubleshoot the end connectors!

Guaranteed, there is a loose connection that soldering will almost always remedy. 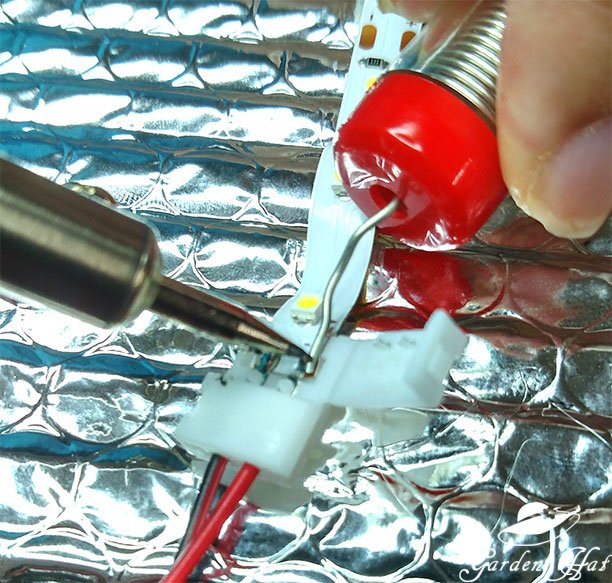 My very first LED strip lit African Violet shelf went up and had been working without a flicker. The second one was another story!

The second shelf seemed to light just fine right after I set it up. When the timer clicked on the next day, that second shelf didn’t light and I had to do the “squeeze test” on the connectors to get it to light. When it did come back a few minutes later, the subtle flickering of the led light strip began. Additionally, when I touched the primary connector that was first in line to the power source, I noticed it was extremely hot to the touch. Almost to the point of burning my fingers!  When I took the shelf down, I could see the connector was actually burned on the outside! Upon opening it up, I found that one of the contacts inside the connector also had a small burned spot next to it.

I replaced this connector with a new one but the next day, the flickering started yet again. This time, it wasn’t the primary connector but one on the opposite end. I did my best to troubleshoot this several times while it was still on the shelf but it just wasn’t going to work as it should. I took it down several times. Which is not all that easy when you’ve used hot glue to tack it to the chrome wire of the shelf! I’d all but given up on using the zip ties after taking it down for the third time. 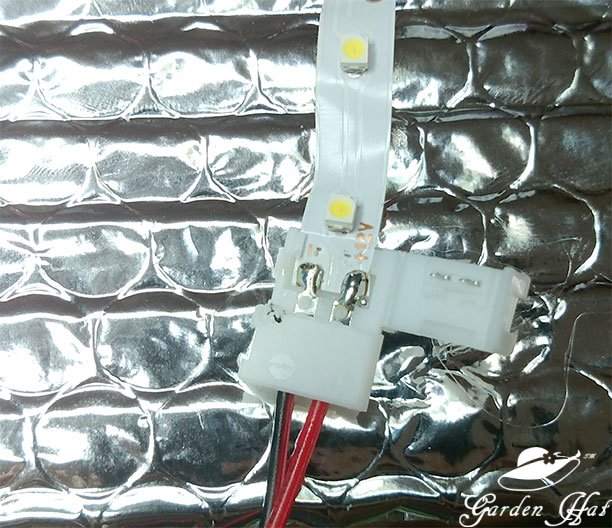 I replaced strips of lights that had overheating connectors. I replaced connectors that had overheated. With none of that remedying the problem and again, looking at the connectors, some of them appeared as though the pins were barely making contact with the copper contacts. I felt the only sure way to correct this problem was to solder the points in place. I whipped out my daughter’s soldering iron and with her help combined with a big magnifying lamp, we soldered each pin to the contacts, snapped the connectors closed again, and tested the lights. Eureka!!  That was all that needed to be done.

From the reviews on Amazon where I bought all the LED equipment, some folks had similar problems and stated that you have to be careful about the COMPATIBILITY of some components. Some just don’t work well with other brands for whatever reason. I’m beginning to see that for myself. One thing is sure; When it comes to the connectors, I’d say as long as they’re the RIGHT SIZE (8mm to 8mm strips or 10mm to 10mm) if the pins inside are a bit off, crooked, or too narrow, the equalizer is the soldering gun! The fixed shelf is up without a flicker and in the future, I may just solder every connection to make sure!