A pretty and fuzzy oddity…. 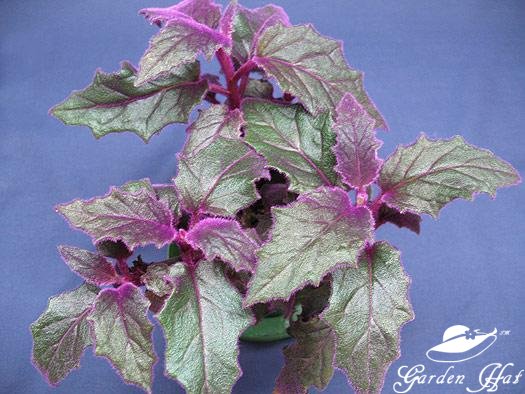 Gynura: A nice oddity to consider

What I label as an oddity is actually considered a “common plant” in spite of its very real horticultural interest. It is the Gynura sarmentosa, more affectionately known as the Purple Passion vine or Purple Velvet plant. This purple-leaved trailer is actually a very unordinary purple plant. In fact, despite its appearance, it’s not purple-leaved at all. It’s the fuzz, not the leaves themselves, that makes the Gynura look purple, the leaves are a dark green, but covered with purple fuzz. There is now a lovely variegated variety with cream markings, Gynura procumbens.

The Gynura sarmentosa has several other unusual characteristics. While none are as odd as its hair, a few contribute to this plant’s qualification in the oddball category. High on this list are the plant’s flowers. The Purple Passion develops dark lilac buds in late summer from which grow small orange flowers. The flowers are not much to look at and, for the first few days of their appearance, emit an unpleasant odor. As a result, you might want to remove them from the plant when they begin to bloom. This blooming also alerts you to the fact that this plant is mature and it’s time to take cuttings. 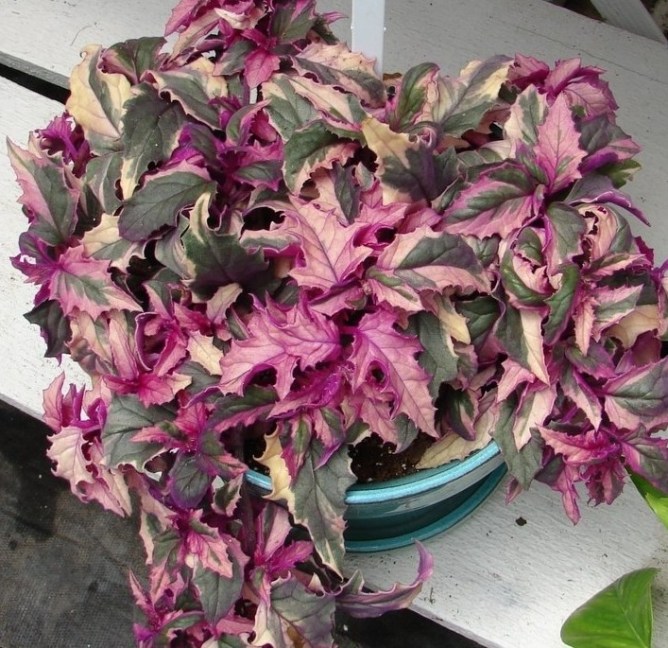 The Gynura sarmentosa begins its growth as an upright plant. As it matures the stems begin to trail, making it an attractive hanging plant. Its close relation, the Gynura aurantiaca or Velvet plant, is similar to the G. sarmentosa except its shape, which is more upright and shrubby.

These members of the Asteraceae family, the same family as Sunflowers, are rapid growers.  They also have the undesirable tendency to become scraggly if they are not pinched back often. These should be pruned regularly to help promote new growth which will compensate for the manner in which the leaf hairs develop as the plant matures.

Oddly, the number of hairs covering the new, small leaves don’t increase as the leaf grows, and more of the green coloring of the leaf is noticeable on mature leaves because the same number of hairs are spread out over a larger surface. Weird, huh? So frequent pruning promotes the development of new leaves, retaining the overall purple color of the plant.

They get scraggly after a year, so when the plant reaches this stage, leaf cuttings should be taken from it in the fall. By spring these cuttings, which root easily in water, will have developed into decent sized plants and then the old plant can be thrown away. 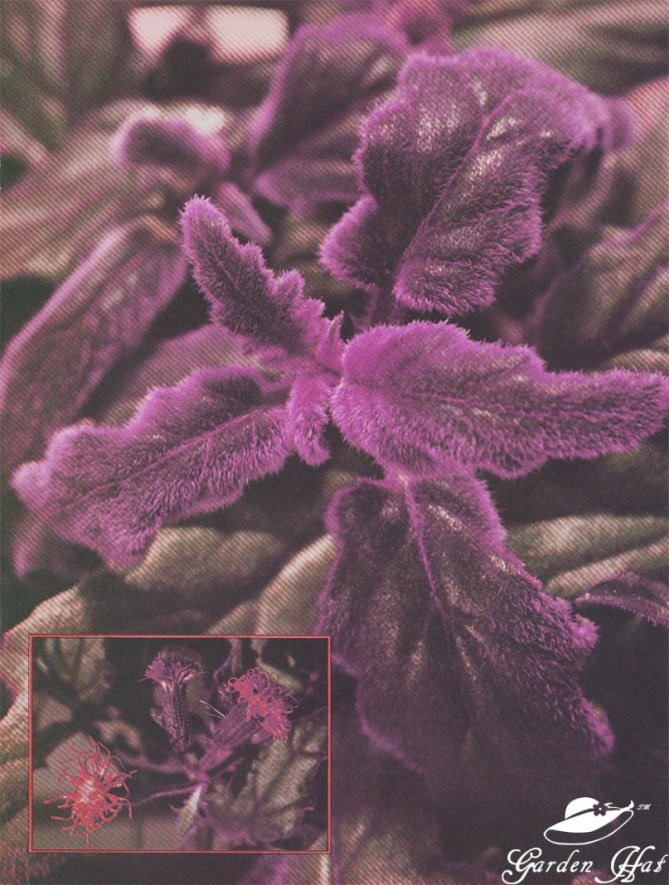 The Gynura species aren’t too particular about the temperature and humidity around them. A climate between 50-77°F (10-25°C) is adequate. The plants don’t need excess humidity, but if you see the leaf edges turning brown or drying up, provide them with more humid conditions. With our heating and air conditioning systems isn’t all that easy. This might be achieved by placing the plants on a moist, pebble-filled tray. By all means avoid misting the leaves because the water gets “trapped” between the hairs and will leave dark spots on the leaves.

When watering Gynuras, just keep the soil moderately moist, the soil should not be allowed to dry out between waterings. These plants are quick to tell you that they’re not receiving enough water because they will wilt. Frequent watering is required during the hottest months. As a result these plants are good candidates for sub-irrigated pots and will likely grow nicely under those conditions.

A Gynura’s soil mixture should be rich, loamy and supplemented with perlite or vermiculite for good drainage. A good houseplant mix and fertilization every two weeks in the summer with a good quality, water soluble plant food at half recommended strength is acceptable. No fertilizer should be given to the plants during the winter months.